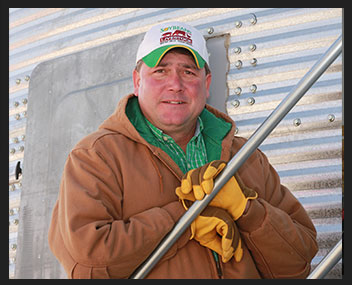 “One And Done” Improves Soybean Plant Health in Illinois

Cool and wet often defines planting conditions for Midwest soybean growers. It’s a situation that can weaken a young soybean crop and set it up for an extended battle with white mold, noted Clayton Casteel, who grows soybeans near Cambridge, Ill.

The perennial yield robber can be easy to spot and difficult to control, said Casteel. And anytime weather stays cooler than normal, the threat of white mold lingers all season long. It’s a profit-reducing scenario Casteel can’t abide. In recent years, he has treated all of his soybean acres with fungicide to improve plant health and protect against disease.

“With high soybeans prices in the past few years, I’ve wanted to make every pod that’s possible, but white mold has limited my yields,” said Casteel, who grows 400 acres of soybeans.

To combat white mold, Casteel has used Headline® fungicide. But he chaffed at the high cost of the product, which requires a mid-season pass across the field to apply—and he worried that early season disease weaken the crop earlier than Headline could be applied.

Such an alternative came when Casteel learned about a new product called FORTIX® Fungicide, registered for corn and soybeans, and marketed jointly by Arysta LifeScience and Cheminova, Inc. FORTIX offers a “One and Done” strategy—full-season fungicide benefits with one early application. FORTIX combines fluoxastrobin, a fast-acting strobilurin, and flutriafol, the most residual and systemic of all triazoles. Combined into FORTIX, these active ingredients are protective and curative, providing fast-acting and long-lasting protection from disease.

“What really intrigued me was the fact that FORTIX sounded like it might boost my yields,” said Casteel.

He applied FORTIX at five ounces per acre on 250 acres of soybeans at R6. “It was applied a week later than I normally would have because of the lateness of the season,” Casteel noted. “So, with the $3 to $4 per acre I saved by using FORTIX, I had the local co-op do the spraying. In a normal year, I do my own spraying.”

FORTIX can also be applied earlier in the season, allowing Casteel to combine its application with the final post-emerge herbicide application to lower his production costs even more. And, it is rain fast within two hours of application.

A lower price tag for FORTIX may have been the first advantage Casteel observed, but yields gained at harvest gave him a profit boost to remember.

As the season developed, weather conditions never formed the perfect storm for white mold to develop. For that, Casteel is grateful. “I didn’t have any disease problems,” said Casteel.

He noted that FORTIX appeared to boost plant health—a fungicide bonus in any season. “The plants stayed greener for about a week longer than my neighbor’s soybeans,” said Casteel.

“I ran a check to see if there’s a benefit to FORTIX compared to another fungicide,” said Casteel. “I saw a good, hard four bushels per acre more with the soybeans that I had applied FORTIX on—43.5 bushels compared to 47 bushels. If soybeans are at $10 a bushels, that’s still an extra $40 per acre I’m making when I applied FORTIX.”